2014 and 2015 look poised to be game-changing years for us! We’ve been consulting with YOU, our wonderful friends, artists, board members, and audience members, discussing our options for 2014-2015 programs. Many of you participated in our survey sent via Vertical Response and Facebook to cast your votes, and together, we’ve unearthed some interesting things: 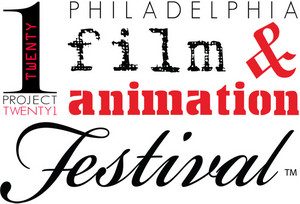 When we first moved The Philadelphia Film & Animation Festival to early fall in 2008, we did it because it felt as though there was a gap there that needed to be filled. There were virtually no other festivals or events going on at that time. Now, six years later, we find ourselves in the heart of what is called “Festival Season” – something we are proud to have helped build. But we also pride ourselves on always being flexible and open to input. To that end, we took a poll of YOU, the same mailing list now receiving this email.

The consensus? Believe it or not, many of you would be interested in seeing PFAF take place in the spring or early summer. People are generally averse to change and vote for the familiar, so we’re taking this idea to heart and MOVING PFAF from its longstanding position in early fall.

For those of you wanting to submit to PFAF, unfortunately, it means a little longer wait for a call-for-entries, and no PFAF in autumn of 2014 as we’ve come to expect. BUT we feel that overall, this switch will give us an opportunity to expand and improve our festival services by the time the event rolls around.

WHAT DOES IT MEAN?

The bottom line? This fall, we will launch our call-for-entries for what will likely end up being a spring 2015 Philadelphia Film & Animation Festival (exact date TBD).

“But it’s April now!” we can hear you say. “What do we do for the next 6 months?” Fear not! We are re-launching programs THIS MONTH, including Movies from the Hill (see below), and yes, the 21-Day Filmmaking Competition, to take place in the summer and fall. We have also helped coordinate MANY other events taking place in the next 2 months, so there should be something for everybody. For example: 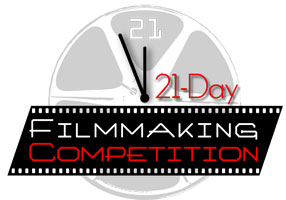 The 21-Day Filmmaking Competition is back! This year, the community has selected August 30-September 20, in order to allow people extra time off from work due to Labor Day and to allow high schools and colleges in session to participate for class credit.

What’s the same? Everything about production is the same. You still have 21 Days to make your film. There’s still a secret element. And, all films created that follow the rules will still be screened theatrically. The Best Films will still compete for awards and prizes as well as being sent to other festivals & screening partners on the filmmakers’ behalves.

So, what’s different? This year, we plan to give the 21-Day Competition an event all its own. All films made as a part of the 2014 competition will have 21-Day Competition Screenings the nights of Monday, October 6th and Tuesday, October 7th at the 300+ seat Ibrahim Theater @ International House Philadelphia, followed by parties at nearby venues to discuss and celebrate the 21-Day Filmmakers’ work. At the 21-Day Competition Screenings, the audience, along with our independent panel of judges will determine the “Best of 2014” films. BONUS: The top dozen or so films will go on to an ADDITIONAL SCREENING at the 2015 Philadelphia Film & Animation Festival. Kinda cool, huh?

In 2010, Project Twenty1, along with many other members of our community in our home base of Norristown, PA, formed an initiative to found Norristown Arts Hill along Dekalb St.

This Saturday, May 3rd, from 10am-5pm, marks the 5th Annual NAH Festival, featuring awesome music, dance, theater, and yes, film! Outdoor daytime film is tough, but anybody who wants to stop by, Project Twenty1 will be hosting an Open House at our offices, featuring food, drink, and top films from prior years playing throughout the office. This informal screening and hangout with the Project Twenty1 founders is a great way to see an example of an artistic business at work in the heart of this burgeoning district, and even better, there will be amazing outdoor food and arts events less than a block away! 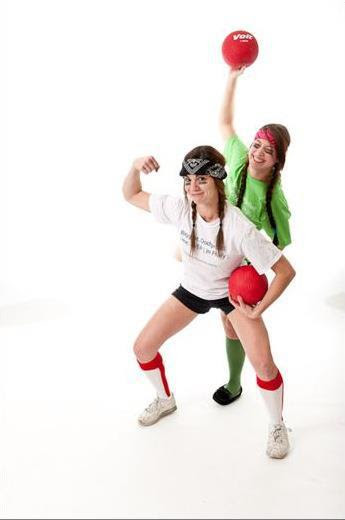 Can’t make it this Saturday? Project Twenty1 is co-sponsoring a couple of cool events with our friends at Life Unchained in the coming months:

First, join Project Twenty1 founders Matt Conant & Steph Yuhas at Dodge Bowl on Saturday, May 17th. Project Twenty1 is one of the beneficiaries of this event, an epic-scale game of dodgeball played on the turf inside the Wells Fargo Center. Two teams of 50 – 100 players square off in a best of three duel in which over 50 dodgeballs are flying through the air at any one time. (Facebook invite)

Yes, we know, many of you are artists and sports aren’t your thing. Have you seen Matt recently? You think he’s athletic? Yet, even he will be taking countless dodgeballs to the face, for the good of our humble non-profit and the other non-profit beneficiaries. So please join us, even if it’s just to film Matt and blackmail him later with the footage, or to hang out afterwards and compare bruises.

Secondly, for those who prefer a little less… activity in their activities, we are also co-sponsors and beneficiaries of Life Unchained’s Footloose Party in Phoenixville on June 7th. This is an 80’s style formal BYOB event with food, and of course, topped off with a screening of the 80’s classic film. More info on that coming soon! 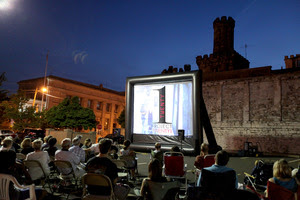 MOVIES FROM THE HILL aka…

For those who attended the previous Movies from the Hill, you may remember it as an awesome night of free outdoor movies in our home town of Norristown, PA. Since it was such a hit, we plan to return and expand this program this summer.

We are currently fundraising to provide this free program to the community, and invite you all back to join us for some friendly family movies under the stars. The keystone events will still be outdoor screenings in iconic locations around town, but this year, we hope to add a few indoor screenings as well. These events will likely occur in mid-late summer, so stay tuned for additional news. 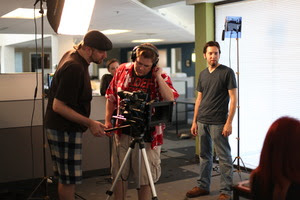 One last piece about our survey we sent out. Thank you all so much for the feedback you provided! Among other answers, we learned a majority of you are happy with many of our programs as they currently stand. So we know: if it ain’t broke, don’t fix it!

One interesting development: Nearly 30% of those filling out the survey mentioned they would be “Very Interested” in participating in a tuition-based 8-week intensive training class that would result in the creation of a short film. Pretty cool! We’ve tossed this idea around internally before, because of how well it meshes with our mission to inspire new content and help emerging filmmakers reach the next level in their careers, but we’ve never spent a lot of time on development for it. Until now.

Thanks to your feedback, we’re going to investigate this possibility. In the coming months, we plan to announce this class, along with details like dates, class length, location, skills learned, and tuition to enroll. Then, if we hit a minimum number of students, we’ll launch the program. Thanks for letting us know this is something you’d be interested in! We aim to serve, and the idea of helping produce new content outside of the 21-Day Competition is intriguing to us as well. 🙂

We hope to see you at one of these events soon!

SAG-AFTRA: Can you use it for Project Twenty1 and how?